History of the Woodwind Orchestra.

Civic wind groups in the United Kingdom can be traced back to medieval times. The father of English literature Geoffrey Chaucer wrote in his poem House of Fame:

"Then I saw standing behind them, far away and all by themselves, many scores of thousands, who made loud minstrelsy with bagpipes and shawms and many other kinds of pipes, and skilfully played both them of clear and them of reedy sound, such as be played at feasts with the roast-meat, and many a flute and lilting-horn and pipes make of green stalks, such as these little shepherd-lads have who watch over beasts in the broom." 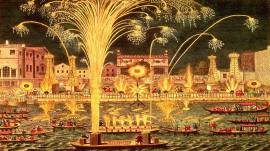 Wind music flourished in the courts of Europe. Henry VIII celebrated his coronation in 1509, which included three days of entertainment, with performances from several wind groups. In 1749 Handel's Music for the Royal Fireworks was performed as a piece for winds after King George II ordered Handel to remove the string parts.

Harmoniemusik played an equally important role in the eighteenth century for open-air and important social occasions. Together with the string quartet, the ensemble and genre most typifies the Classical era. In 1782, Joseph II, Holy Roman Emperor, founded his Imperial Wind Ensemble in Vienna. Harmoniemusik had an important influence on the development of the symphony orchestra. Mozart and Beethoven became more daring in the way they wrote for the wind sections in their symphonic works. Anton Reicha and Franz Danzi were two pioneering composers of the wind quintet but by the end of the nineteenth century, interest in this ensemble began to fade. 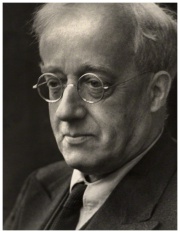 It was around this time that the wind orchestra became an important vehicle for composers to advertise their operas and orchestral works. Rossini, Liszt and Wagner appointed bandmasters to arrange their works to be performed to the masses at bandstand events. Holst, Vaughan Williams and Grainger began writing original works for the wind orchestra at the turn of the twentieth century. These works were the seeds which grew into the now extensive body of repertoire which exists for the medium. Further into the twentieth century came a renewed interest in the wind quintet. Many leading contemporary composers have produced wind quintets which have become standard chamber repertoire.

Much has been done to promote wind music through organisations, institutions, music retailers and passionate individuals but this would fall largely into the wind orchestra genre. Indeed it is the development of the wind orchestra which procured an environment whereby music for the woodwind section was required.

Recordings of the Woodwind Orchestra. In 2014 a recording was made with the Czech Philharmonic Wind Ensmble conducted by Shea Lolin. Further details are available from: www.twistedskyscape.com